This is the first real personal exhibition of Christian Lapie at the Galerie RX, which gathers 7 oak hood sculptures, all created in 2020. His work has already ever been presented in this private mansion when Chantal Colleu-Dumond (director of the Domain of Chaumont-sur-Loire) invited him to participate at the 4+4 format last year (from January 26, 2019 to February 21, 2019), appearing retrospectively as a preview.

À l'ombre de la lune, Au-delà de la lumière, L'humanité des arbres, La nuit et l'arbre, Le temps se souvient, Noir de lune...Christian Lapie pays a particular attention to the titles of his works “I want them to be like a Japanese haiku, like a poetic clue for an imaginary, the work must be like a poem”.

But the titles also reflect a concern which seems to go round and round in Christian Lapie’s mind, a question that has never been resolved: “The darkness of origins”. By placing himself beyond the human time, by proposing an artistic language that tends toward universality, the artist joins the quest for transcendence and spirituality that human beings have been carrying since the first decorative caves. There is at stake the need for “Man to mark in a spiritual way his time and his relation to the cosmos which seems obvious to me”. And to extend the reflection with the words of Paul Klee “art plays without suspecting it with ultimate realities, and nevertheless reach them. We imitate in the play of art the forces that have created and are creating the world”.

“For my exhibition at the Galerie RX, I would like people to be able to say ‘There is something sacred in these works’ and as Régis Debray writes: you can’t escape the sacred, if you turn your back on it, it will get you into the worst trouble. The sacred overflows the religious, just as transcendence overflows the supernatural”.

If everyone can see there totems, guardians, warriors, ancient heroes, they are “figures” for Christian Lapie, upright shadows that invite to elevate the spirit and the soul, symbolically as well as humanly.

Christian Lapie voluntarily chooses to present few works for a very simple and sober exhibition, privileging sculptures as much as the spaces surrounding them. This is a true spatial writing, alternating what could be strokes of charcoals pencils and voids to play a visual score. Then, time is as if suspended, maintained in a high point that invites us to contemplation. The rhythm between these silences and quarter notes is given by the spatial setting of these works, which are never presented in a frontal way, Christian Lapie preferring the surging or the surprise.

If the artist is famous for his monumental sculptures seven meters high, those he designed for the gallery are in a more reasonable size: a rather large one will be placed under the canopy, and around it, 6 others (between 1.70 and 2.20 meters). “They are composed of groups of several figures (2 to 4) for the same tree that has been split into several pieces. I am very attached to this idea of the founding unit from which the multiple is born”.

Christian Lapie was born in 1955 in Val-de-Vesle in Champagne-Ardennes, France, in the family farm where he lives since 1979, after his studies at the Ecole Nationale Supérieure des Beaux-Arts of Paris. A painter since his early days mixing all kinds of materials, he found his true artistic language after a founding experience: in 1992, when he was invited to participate in a group exhibition at the Museum of Modern Art in Rio de Janeiro as part of the “Earth Summit”, he realized that his ironic and political discourse was addressed to a western-centered contemporary art world. Then, he wants to create a work which is addressed to all, whatever the culture, the country “that each one can his own and for which one can neither origin, noor the epoch, that is a universal symbolic sign” as he expresses it. Since then, he has installed his great “figures” on every continent, since India to Canada, Japan, Cameroon, France… and most recently in Menorca, weaving an international network from which these protective and benevolent effigies radiate. 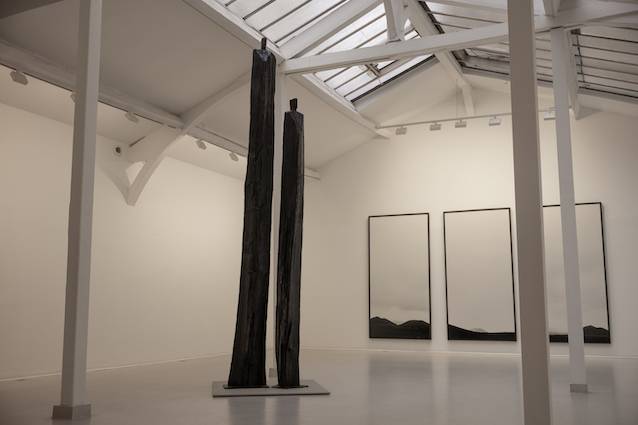